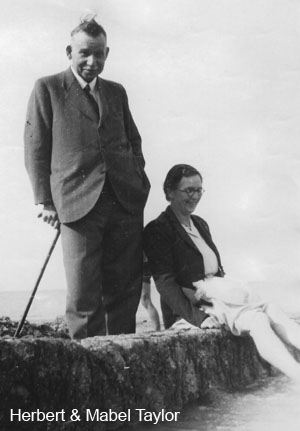 Herbert Edward Taylor had lost the first finger of his right hand and therefore was unable to fire a rifle during the First World War, so instead he took over the Cringleford business, while his brothers were called up for military service. Herbert married Mabel Louise Morse in 1910 and their son, Peter Edward, was born in 1915. A first daughter, Ruth Mary, arrived in 1917, Thomas in 1919 and a second daughter, Nancy Elizabeth, some five years later.

For a short period the family moved into a house in Intwood Road and then in 1918 to ‘The Laurels’ on Intwood Road. The business prospered and so when ‘Ford End’, the large house on the main road opposite the church became available, Herbert purchased the house, and his family moved in.

Ford End was the home of Mr and Mrs Barber. They attended Church and Mrs Barber regularly fainted and had to be carried out. When they went on holiday Herbert fed their cats. On the death of the Barbers, Herbert bought the house for ?1,400 in 1928. The solicitors dealing with the conveyance was Woolsey Sayer & Thorold and their fee was ?25. Spelman’s valuation fee was three guineas. Herbert pulled down the old kitchen, scullery and pantry when the main road was widened for the second time. A new kitchen was built at the other end of the property. The Taylor family moved into Ford End in early 1930.

(Note by Nicholas Taylor: During 1928 Herbert Taylor purchased other properties in Cringleford although I am unsure which these were. The vendors were Mrs Edwards and a Mr Bilham. I believe Mr Bilham sold some land ‘Cringleford Land’ for 698 pounds, 8 shillings and 10 pence.)

Herbert was elected to Norfolk County Council in 1925 and became an Alderman in 1947. He was chairman of the Fire Services Committee, Selection and Staff Committee and Office Accommodation Committee and was a member of the Highways and Public Protection Committees among others. In 1930, he was appointed a Justice of the Peace and served on the Taverham Bench for 30 years. He had been Chairman for the seven years before his retirement in March 1960. In addition, he was heavily involved with St Andrew’s Hospital, Thorpe, being a member of the Visiting Committee and then it’s Chairman in 1947. 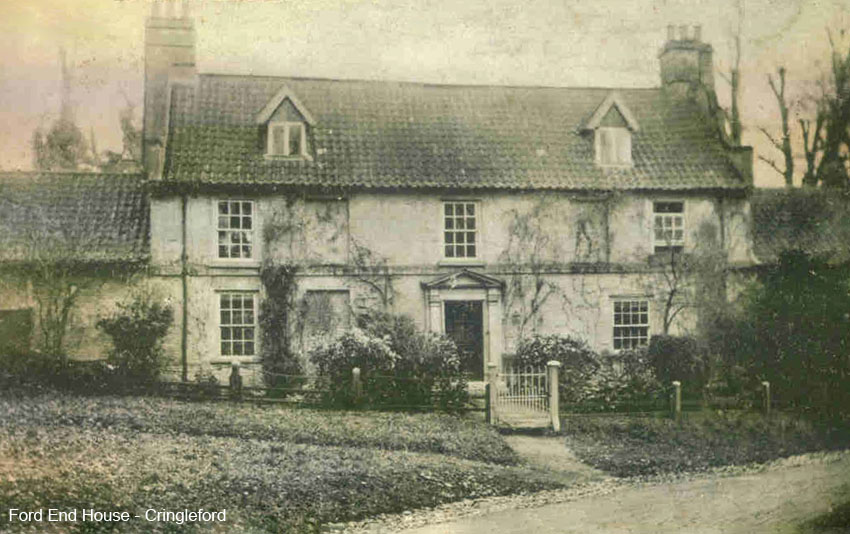 During the 1930’s Herbert was quite the man about town and owned a succession of handsome American Chevrolet cars. In Cringleford, Herbert was equally generous with his advice and help: he was chairman of the Parish Council for more than 36 years and people’s warden at the church for a similar period. He gave the Church the silver processional cross, the priest’s stall and two Churchwarden’s wands. He was a founder-member of the Patteson Men’s Club and was on the Maycrete Hall management committee. During the war he was chairman of the Invasion Committee and War Savings Appeal and acted as senior special constable. It was in the latter role in the Second World War when Herbert was forced to take cover one Sunday morning, when an enemy aircraft, a Meschersmit raked the churchyard with machine gun fire. A tombstone with a large hole in it can still be seen today!

This event was witnessed by Mr P Turner.

‘I should like to relate a little story in wartime Cringleford. I was walking home next to Taylor’s Garage when I heard a very low flying aircraft coming from the direction of London. I heard someone shout to get in the Church, but I was a little slow. I only managed the porch, so I had a grandstand view of the German fighter shooting up the area around the Church. The bullets hit the graveyard, the Vicar’s fence and blew a large hole in a tombstone about 20 feet from where I was. I later learned that the person who tried to warn me was Mr H E Taylor, who was sheltering behind a part of the flint wall surrounding the graveyard from the road. I was about 10 years old at the time, so it was a great adventure! The aircraft was so low I was able to see the pilot’s head quite clearly. I think on reflection he may have been aiming for the petrol pumps outside the garage used by the Army from Keswick Hall, an RASC Unit.’ 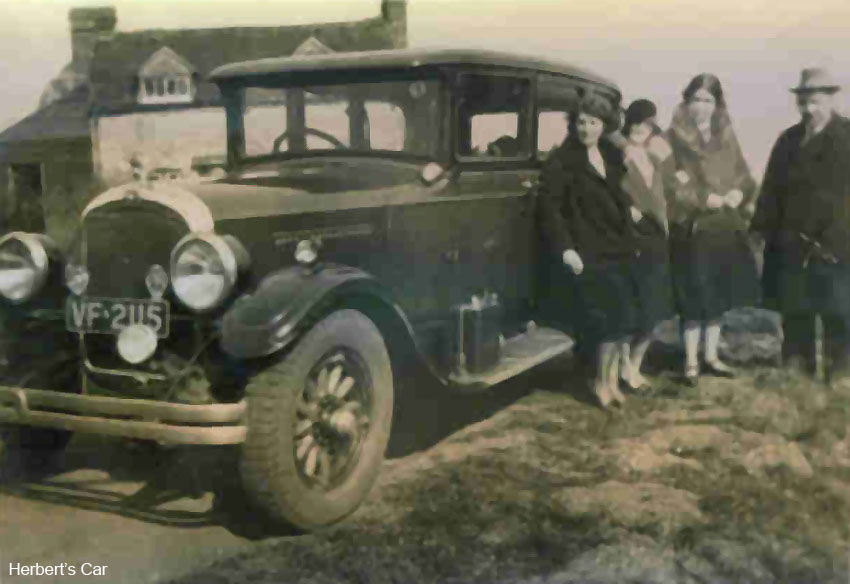 There was a celebration at the Samson & Hercules in Norwich on the 50th Anniversary of Herbert’s work with the firm, 11th June 1948. The illustration below is reproduced from the Menu card and provides an insight into the many different vehicle bodies they produced. It hints by the style of the earlier vehicles that they produced vehicles during the First World War. Herbert retired from H E Taylor’s a couple of months before he died in November 1960 aged 75. Nicholas Taylor, Peter Taylor’s son, believes there was considerable resentment between Herbert and his son Peter, that Herbert remained in control for so long. It is uncertain what lays behind this as Peter Taylor never really talked about his father. A clue is in the Will of Herbert Taylor which states that if Peter and his brother Tom Taylor wish to own the shares of the firm then they would have to pay a market price for them from the estate within 6 months of Herbert’s death! Of course neither could afford to buy the firm and soon after the death of Herbert Taylor, most of the firm was sold to RG Carter. Resentment was further stoked when only after a few months the business was sold by Carter’s to Jewson’s. The garage was sold to Nutt Engineering Co Ltd. 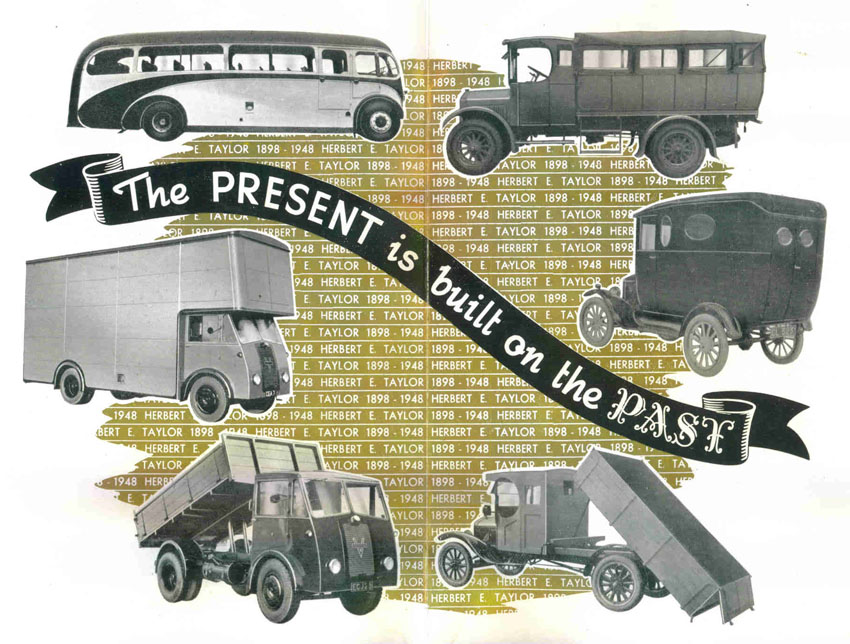 The Eastern Daily Press reported the news of Peter Taylor leaving the family firm of H E Taylor and this shows some insight into the ill feeling of the time.

Mr Peter Taylor tells me that he has severed his connection with his family firm of Herbert E Taylor & Co Ltd, of Cringleford, and from today is taking control of the building and decorating business of Messrs. A Burrell & Son, the head of which Mr Alan Burrell died suddenly earlier this year.

When his Father Mr Herbert Taylor retired some while ago, the Cringleford business was taken over by Messrs R G Carter, with Mr Peter Taylor remaining as Managing Director. Later it was sold again to Messrs Jewson, and Mr Clifford Kowen took charge of it.

“I feel that I am better suited to a smaller business which I can run myself.” Mr Taylor told me yesterday. He is one of the best known of the City’s Undertakers and he tells me he will be building up this side of the business with his new firm. Already he has many valuable orders for Church joinery work, in which he has specialised for many years.’

Who knows the reasons why Herbert remained in control of the business? Perhaps he doubted the ability of Peter to run it successfully? Looking at the achievements of Peter with the Showground work and the high class work with Church furniture, I doubt this. Certainly the business suffered towards the end with lack of investment and reluctance to change its working practices. I know that Peter always resented the fact that his family home in Cantley Lane, which he built himself when first married, had to be sold to pay off some debts of the Company. I believe he gave the proceeds of about ?5,000 to pay off debts and he was never repaid this money despite Herbert continuing with an affluent lifestyle. Peter and his family lived in rented accommodation after this (Cavell House was leased from the Steward family of Gowthorpe Manor). My mother Marjorie claims that Peter was bullied by Herbert and that would appear to have some validity. Clearly Herbert had a wonderful reputation with his work for the community and the Church and was loved because of this. Nonetheless he certainly had a ruthless part to his nature.

Back to the Taylor Family Tree