Peter Taylor was born at 23 Intwood Road, Cringleford on June 26th 1915 and was the eldest son of Herbert and Mabel Taylor. The following are taken from some notes written by Peter before his death. 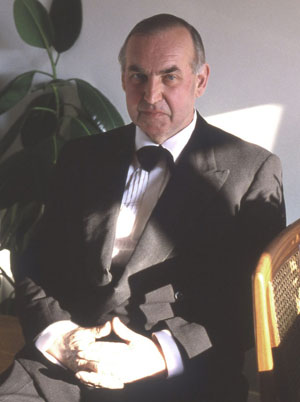 At the age of three we moved to a new house built at the corner of the Intwood Road and the Main Road, called The Laurels. I remember seeing Father putting up the blackout screens which must have been in 1918. As the house was large, Mother let two of the rooms. The first was to a widow whom Mother caught stealing coal from our cellar and the second was to the widow of Dean Beeching of Norwich Cathedral. I recall she had a Persian cat.

I started school in 1920 at Miss Barber’s mixed school in Chapelfield Road, Norwich. I remember Mother crying on the first day she left me there. We were given slates to write on. There was one toilet for about 100 children. The boys had to use the drain in the centre of the playground. It was not a question of which way the wind was blowing but from which direction the girls were looking! I was collected after school by Father’s secretary Miss Olive Bussey and taken home on the tram.

In 1921 Miss Jessie Tusting started ‘Home Close School’, in a tin hut (corrugated iron) in the garden of her parent’s house in Colney Lane. The site is now part of the By-Pass. The first pupils were myself, my sister Ruth, Peter Tusting and Norman Brown, whose Father was the manager at Eaton Brewery. The school colours were blue and yellow.

In 1923 I started at King Edward VI School, the Grammar School in the Cathedral Close in Norwich. In my first term I won the form prize and again won it for the first year when I was presented with a book on geography at the school prize giving. Sadly I went steadily downhill from then on being among the bottom three until I left in 1930. I was in Brook House under Aubrey Aitken who was my prefect. He later became the Bishop of Lynn. During my time there I played rugger for the school XV team and was given my colours for cross country running. My black painted bicycle held the record for the fasted time around the Cathedral Close Gardens, but the record was not with me riding it! My Mother made my school shirts. I had one particular blue one which was the envy of the school.

Later I was excused sport as my father thought that I would be more gainfully employed in the family firm’s office.

When I was 13 years old my Mother’s Uncle Ernest Morse, a rose grower at Eaton was the Chairman of Norwich City Football Club. He used to take me to see the matches played at ‘The Nest’. I sat with him in the Director’s Box. The matches I remember most were against the Corinthians, an amateur team in which we lost 5 - 0 in the 3rd round of the FA Cup. Another match was when we beat Coventry 10 - 2, and the match we won to get promotion to the second division for the first time. I saw the Shield presented to the Manager, Mr Tom Parker.

I joined the family firm at the age of 15 in 1930 to work for my father. I worked in all departments of the business and passed my qualifications. During the late 1930’s I taught Building Science at Norwich Technical College and I was also a Sunday School teacher in Cringleford.

During the Second World War Peter carried out building work for the Ministry of Defence and in addition was Captain of the Auxiliary Fire Service which operated from a station near Pond Farm on the main road in the village. The brigade attended fires many miles away, including some of those in the London Blitz and of course the Baedeker bombings of Norwich in 1942.

Peter joined the Fleet Air Arm in December 1943 and after training joined HMS Royal Arthur in Skegness. After further training and different postings Peter applied for and was granted a discharge. The war was nearing the end and there was much reconstruction work to carry out.

After the war Peter led a 300 strong team to carry out rebuilding work in London.

Peter was local President of the National Association of Funeral Directors and a Fellow of the Institute of Builders. Following the good example of his Father, he was elected County Councillor for the Humbleyard division in 1952.

The family holidays were mainly spent at a very basic wooden chalet in Happisburgh it has now fallen into the sea! During the late 1950’s and early 60’s we had our holidays in Sheringham. We went to Cromer one year but didn’t like it! At Sheringham there was a Cinema owned by a man to whom Herbert Taylor had sold buses. (Was this a Mr Randall from Overstrand)? The Cinema seats were the old bus seats.’

I recall my Father Peter being a hard working man who had a genuine desire to help many people. Perhaps a few may say it was his desire to feel valued which was lacking from his own father. In any event he was a much loved and respected Funeral Director who built up a wonderful reputation. If he had a fault it was in trusting people. I recall an attractive sales lady offered him a free office stapler if he was to buy 12 boxes of staples. He agreed and a few days later a large lorry delivered 12 very large boxes of staples along with one very small stapler. The stapler lasted a few weeks the staples are still being used some 35 years later!

He was also very trusting of professionals such as solicitors, bank managers and financial advisors. I fear he was often taken advantage of. When I first took over the funeral business I was alarmed at the rate of interest he was paying to the Bank for the modest overdraft. While I made an appointment to meet with the bank manager the rate was reduced by 1% and it was reduced a further 2% after the meeting. Still, it was the mark of his character to think the best of everyone and he laid the foundations for me to develop the funeral business after he retired. Nicholas Taylor

Back to the Taylor Family Tree