My thanks go to Eddie Holden, Derek Freeman, Michael Folkard and Chris Wright for providing such wonderful and colourful memories. Naturally there are a few discrepancies with various memories so please if anyone can confirm or clarify anything then please make contact. 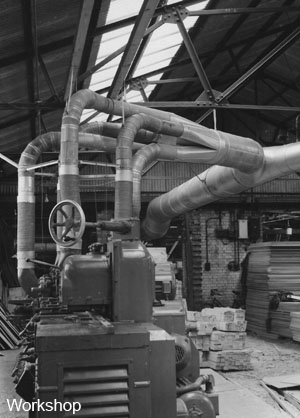 Eddie Holden’s memories are in italic. I mention names of those we believe worked at various times in each department. I shall be happy to add to this list or make alterations if readers make contact. Naturally most of the memories are based on the works since the war until the firm was sold in 1960.

I was under him most of time I was there, a Geordie from Newcastle on Tyne, walked down to Norwich with tools on his back to get a job in the 1930s with his brother Charlie, both snuff takers.

I (Eddie Holden) was also under him as well. This man a WW 1 soldier, got hit in the knee and he had a stiff leg as his knee could not bend, so that's where I came in doing the ground work for him, and glazing with triplex glass to window screens, which in those days were flat and we had to seal the edges with electric iron that melted the plastic between the glass and then sealed with a black cement.

Michael Folkard recalls :- I joined Taylor’s in 1950 but there were only two people employed in Coachbuilding and they were Ike Mortimer and Leslie Tyrell. Leslie was a Panel Beater/Sheet Metal worker and Ike a Wheelwright/Coachbuilder. Ike was highly skilled, superb craftsman and extremely knowledgeable. At the time I joined they were working on a horse drawn wooden Brewery Dray for Norwich Brewers Steward and Patteson. This was displayed at various County Shows to advertise the Brewery. Ike retired once the Dray was completed.

Robert, cannot remember surname but he too a snuff taker.

Then a man we called Dummy, he was deaf and dumb, we used sign language to him. Sadly one night going home on his bike he was knocked off and died, yes I got to do sign language very well.

Then at the far end of the Coach Shop were two more men, Panel Fixers, cannot remember their names, some panels were of Ali and some of metal.

This was located across the roadway from the main sawmill. It’s only function was to cut processed tree trunks lengthways. It always seemed to move at the speed of a snail but was seriously efficient and accurate. This was the province of Billy Burrows.

Located near the crane and timber storage area. All green wood was processed through here. Off-cuts were available on Saturday mornings for a few bob a barrow load.

Very large and impressive feature of the complex with tripod legs and a large high jib which also rotated. Situated in the timber delivery and storage area. It was used for unloading the large timber delivery trailers brought in by H J Green’s heavy Foden Tugs. The crane also moved timber into the sawmill.

Morris Freeman he was in-charge of that, you had to produce a ticket signed by the foreman to get what you wanted, and yes when MORRIS had a day off I was lucky to be asked to look after it for him, that was my first job of responsibility and I felt like a king at that time.

Harry Thrower was foreman before the war and he taught Eddie Holden to drive buses up and down the yard. He did this so he could stay in the garage, and I could shift the buses in and out of the coach shop without him coming up to do it. Not bad for a sixteen year old at the time.

I spent time there as well after helping Ike Mortimer to make wagon wheels, and then we had to put the iron rim on the wheel. Well that was hard work, and had to be fast, the iron rim was heated to red hot, and wheel bolted down on a steel plate, then three men got the rim and on it went. Now my job was to pour water on this as quick as possible to shrink the steel rim quick around the felleys.

Cannot remember this man’s name who was in-charge of this, but they made coach seats and covered panels in the sides of coaches. Mirrors they fixed and seat numbers plus all instructions for passengers.

Well it had a name, ‘God’s Palace, Herbert’s Domain’. This was the building that Edward Taylor and his family lived in when they first started in 1890.

This was run by a big gas engine that worked every machine in that shop. A single cylinder engine with two very big fly wheels and belts everywhere to work all the woodworking machines.

They made everything you can think of, from Coffins to large furniture Dressers. We believe the names of some of those who worked in the Joinery Shop were Sidney Freeman, Colin Kirk, Edwin Peck, David Hindle, Geoffrey Lister, John Chittock and Roy Bilverstone.

Was started at the beginning of the war, now when I was there the canteen was right at top of the firms yard next to the main road and part of this building was let out to war time shoe making.

This was out of bounds to all, you had to knock the doors first before you were allowed in. Why, because everything was dust free, and they had two pints of milk every day to wash the fumes down. It was a special paint, and yes all hand painted, but a man from Norwich came to sign write them with the names, he was from Cathedral Square, name of Rolly, that's all we called him, yes he would start at one end of say a removal van and had to write diagonal, he just did it and in Gold Leaf at times like Wallace Kings Removals and he never got it wrong, all free hand, they were artists.

John Clarke painter and the other we called Moses.

Taxi Driver was Henry Skipper, (or Jimmy) and he drove a Reo Speedwagon, with gears that you pulled out from the dash board or just under. One of the lorry drivers was OTTO a German who came here in WW1 as a prisoner, and stayed, married, lived at Mulbarton, but I think he was interned in the WW2, till the war was over. They interned them just in case they turned out to be spies, and your Granddads firm was doing war work. He came back to his old job, as lorry driver after the War. Prior to the Vulcan, Otto drove a Reo Lorry that had no windows in the doors and had a very large bulb horn fixed outside of the cab as an audible warning! The Vulcan Lorry illustrated KPW 217 was delivered to Taylor’s in chassis/cab form with a Perkins Engine and supplied by Tilling Stevens. It was the first new vehicle purchased after the war and a drop-sided wood body was made by the carpenters in the body shop. The livery was a rich brown colour with white writing on the doors and a yellow line across the cab and down to the bumper. Inside the cab was cream coloured. It was mainly driven by Charlie Wright from new.

Some of the coaches that were built there were for Leonard Votier, Mascot Coaches, his wife was an actress. During the war we patched up London buses that were hit in the raids, and we all so built some army lorries and ambulances.

There were about 20 young lads worked at the firm, some were apprentices some worked in the yard moving timber, some were learning to use machinery, yes quite a hand full for Herbert to contend with. Well one winter’s day snow fell and yes, boys will be boys, and I was one of them. We got piles of snow balls inside the shop doors ready for someone to get one, well we waited till heard someone walking down the yard, then door open away goes the snow balls, well yes you must have guessed, Herbert got the lot. Well he turned and said you want to play with snow, now go to my house and clear all the snow off all pathways and driveway. He said something like you young lads will be the death of me,  well we thought we were in for it, as he would phone his wife and for her to tell us off, well not so. First we knocked on the door and said we have come to clear the snow away. Herbert had phoned. Well we were asked to sit in the kitchen and Mrs Taylor said the cook will get you all a cupper tea, or cocoa, well then she said do not tell Herbert will you, no not us, anyway we got the job done and she was over the moon. Then she said next time it snow you come straight over and clear away. We will, now whether Herbert ever knew what went on, we did not say and he did not ask, but I can say this, Herbert never got another snowball in his neck.

I was hacksawing a piece of metal for the underside of a coach for a spacer. Well the hacksaw blade was getting blunt so the fellow I was under said go to the saw doctor’s and get it sharpened. Well, I did not know any different so off I go to see this man. I said Mr Barker sent me to get this sharpened. Well he looked at me and then took the blade and snapped it in two, gave it me back and he said go and tell Mr Barker to stick this right up his ****!

Now on all coach doors that opened had a check strap on them that were made of leather so they didn’t open too far. This was for cars and lorries too. I am talking of wood framed doors with metal covering and was innocent to the fact. I was sent to the Upholsterers to get some strap oil, Mr Barker said he needed it for the straps to the doors. Well I didn’t stay long there as this man started to take off his belt and I was going to get it across my backside, lesson learnt again.

Old Billy Jackson, The Blacksmith, well one day he said to me I’ll let you hide three pieces of metal in around any of the workshops on the firm’s site. But he said I will know where you hide the third piece of iron before you get very far away. Well off I go with one piece then back for the other piece of iron and then the third piece of iron. He said that’s it on the floor so I go to pick it up well I drop it quick, yes it’s hot, too hot to handle so I threw it down on the floor. He laughs, he said I knew it I told you I would know where you hid the third piece. We also passed these pranks onto other young lads that came our way.

In the coach shop was a long girder with a chain and pulley on it for lifting heavy things in the shop. One day I was playing up Mr Barker and having a bit of fun, yes I might have gone on too long but he and others got me back. They hooked me onto the hoist by the back of my overalls. I hung there in midair and it went very quiet as in walked Herbert on his rounds. He eyes me up and down. All he said was you will learn to keep your mouth shut and off he went. A little smirk on his face and me, I nearly shit bricks as I thought I was going to be told off.